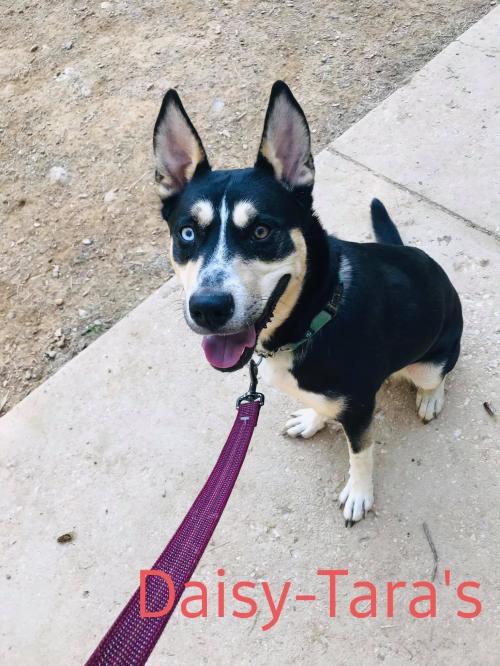 Daisy is a 1 yr old female Husky mix.  She arrived on 8/6/21.  She's a young pup that needs basic training (manners, impulse control and focusing).  Can't wait to meet her!  If you are interested in adopting Daisy after she completes her training, please contact her Rescue.  Tara's House Animal Rescue at mvm11@comcast.net or waldiesmom@gmail.com.

Week 1.  Daisy is quite the adorable wild child.  She loves (almost demands) attention from all people she meets, and the others.  She definitely exhibits typical husky behavior (jumps on people and just a complete ball of energy).  She did well playing with the other dogs.  She is housebroken and has finally gotten used to her crate.  She also has finally started to respect her handler's space in the cell.  Daisy is learning her basic commands.  She already knows sit and down.  She needs a lot of work on leash walking (she is a puller).  She enjoys playing fetch.

Week 2.  Daisy started showing some issues with resource guarding, which her handler is now addressing.  She loves people and is easily excitable and wants to jump on them.  She knows sit and down, and walks pretty well on the leash.  If she sees another person will pull to get to them so she can get more attention.  Daisy is very high energy and she tends to play rough with the other dogs (grabs their collars).  Some of the dogs have reacted but there has been no follow through on the other dog's part (they check her).  She can be a bully with some of the other dogs. When she becomes really excited she loses all ability to control herself and starts mouthing.  She is immediately corrected of that behavior by her handler

Week 3.  Daisy is starting to calm down a lot.  She does still try to jump to get attention, but not nearly as much as she did.  When she is outside walking with her handler walking alone, she is extremely good.  However, if other dogs are in the yard, she becomes distracted, wanting to play with them.

Week 4.  Daisy's Handler is continuing to work on her jumping and mouthing issues.  She is a super active dog young dog who never was taught any manners.  Add to that she is a Husky mix and what you get is a lot of playfulness and energy.  She can be calm with just people around, and does well on the leash.  But as soon as she sees another dog, it's playtime!  Her Handler believes she really would do well with another dog which has the same basic personality.  She's great with people and dogs. but can be a little rough, so an ideal family would be with kids over 10-12 yrs old.  She loves to play fetch, and one of her secondary Handler's has said she "can run for days"

Week 5.  Daisy is showing great progress every day.  She is an extremely loving and affectionate dog.  Her main issue continues to be jumping on people.  She has shown improvement but still has a ways to go (she just get so excited she can't help herself).  Daisy is not reactive to anything.  If another dog shows aggression, she does not react and justs walks away.  With regards to people, she LOVES everyone!  She will take affection from anyone!!  Daisy has learned her cues/commands sit, down, paw and leave it.  She loves to play with her ball, but loves playing with the other dogs even more.  She has learned to open and shut her crate door, as long as the latch isn't locked.  Her Handler doesn't recommend a home with small childen (she might knock them down).  Daisy is a very high energy and active dog.  She would never burn off her energy in an apartment.  A big fenced yard with another dog would be the best life for Daisy.

Week 6.  Daisy is a sweet and loving dog whose only real issue is she is constantly seeking affecting, and with that she still has a tendency to jump on people.  Her Handler states anyone could come in his cell and try to rob him and Daisy would wag her tail hoping to be pet before you leave :-)  Daisy is not at all people reactive although she seems to bond faster with females than males.  She also gets more excited when she is around women.  Daisy is still pulling on the leash with just a collar but walks fine with the Easy Walk harness.  If she is out being walked and she sees another dog or any other distraction, she just needs the command "leave it" and she will fall back into a perfect walk.  Her Handler likes to play a game of hide and seek with her.  He will take Daisy out, come back in, take one of her toys out of her crate and hide it. She will immediately know what is missing as soon as she comes back into the cell and immediately looks and finds it.  Daisy is also very inquisitive and anything new she sees she has to investigate what it is.  Her best home would be with a family and older kids (she could accidently knock down a small child), a big yard with another dog to run and burn off her high energy.  She is truly a sweet girl that definitely has that husky energy

Week 7.  .Daisy is very affectionate and loves people.  Her Handler is still working to contain her energy (she can go from 0 to 100 in a second).  She is still a young dog with enormous energy.  She is very vocal when playing with other dogs (people who don't know huskies may thiink she is growling--just normal husky vocalization).  She would do well with another dog, providing the other dog has equal energy.  Daisy knows her cues/commands (sit, down, paw) and does well leash walking when she is in her harness.  She continues to pull when she is just in her collar.  She loves her toys and chasing balls.   She has a favorite big red ball with handles she takes everywhere she goes.  She is a very young, playful and energetic dog.  We would not recommend a home with small children because of her size and energy which could cause her to knock the kids down.  For training purposes, she is very treat motivated, which is very helpful.

Week 8.  Daisy is steadily making progress and has really calmed down a lot.  Her anxiety is still high but nothing like it was when she first arrived.  Daisy has a very high intelligence level.  Her Handler can't hide anything from her.  When she wants peanut butter, she will bring her hollow bone to me so I can fill it.  When she has to go to the bathroom, she will go to where her leash is and put her paws on the wall to let me know.  She never goes potting in the cell or the tier.  Daisy has no reactivity to people or dogs and no resource guarding issues at all.  Daisy knows the cues/commands sit, down, paw.  She walks extremely well with a harness but continues to pull when using just her collar.  Because she is food/treat motivated, training would be much easier. Daisy would do great with another high energy dog and kids over 13 or 14.  She might easily knock down a younger child if she jumps on them (still working on her jumping on people; better but still will jump).

Week 9.  Daisy is also approaching  the time for her to find her furever home.  As each day passes, her Handler's bond grows stronger.  She is much more respectful and more obedient.  Daisy does still jump on people she doesn't see every day (she just has to give a big welcome).  She has become much calmer now than when she first arrived.  Daisy has no reactivity issues,  She loves all people and dogs.  She know all her basic cues/commands (sit, down, wait, stay, leave it).  Her Handler is focusing on her recall.  Daisy woud do well in a home with another active dog to help burn her energy.  She loves to play fetch and as one of the other alternate Handler's said, "she's the life of the party" when playing outside.