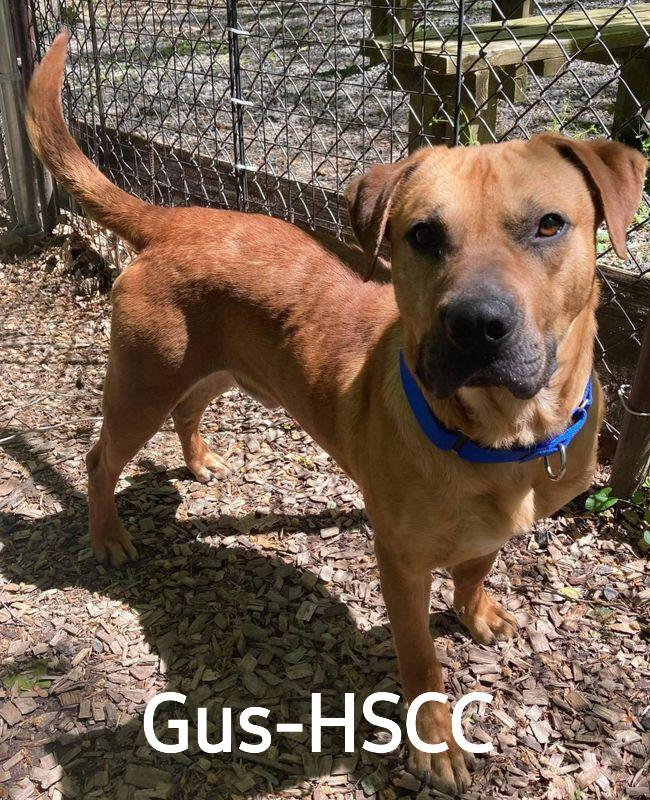 Gus is a 3 yr old male Lab/Shepherd mix.  He arrived in the program on 9-8-21.  Gus's issues were described having dog reactivity in the shelter and basic manners, loose leash walking and excitable. If you would be interested in adopting Gus when he completes his training, please contact his Rescue, Humane Society of Calvert County at nicolesmith703@gmail.com

Week 1.  Gus arrived in the program on 9-8-21.  Before entering the program, we were advised that he was reactive to other dogs and sometimes people. Since he has been in the program, his Handler has not observed any problems.  He loves affection from people and he play very well with the other dogs.  His Handler says, in his opinion, Gus is a well-behaved, loving dog.  He has good manners but does tend to pull on leash when he gets excited.  He will also bite on the leash when he needs to go potty

Week 2.  Gus is a great dog.  He likes to play with other dogs and he loves people as well.  He is house trained.  He will try to chew his leash to let you know he has to go outside to potty.  He has very good recall and has shown no reactibiyy issues at all.  He know how to play well with other dogs and he knows to leave them alone if they don't want to play.  He is good with all his manners (sit, stay, etc.).  However, he is a big strong dog who tends to want to pull when on leash.  If you tell him to be easy, he won't pull as much.  His Handler is still working on this.

Week 3.  Gus came into our program on 9/8/21.  He is a friendly dog, very rambuncious and very strong.  He was very hard to handle when he first arrived.  At this point in his training we are working on basic behavior cues.  He is doing very well.  He is very treat motivated (good for training) and basically just a goofy sweet boy.  He loves all people.  Anyone can give him a command and he will respond accordingly.  He also loves attention.  He plays well with most of the dogs but his strength and size intimidates some of the dogs and he doesn't appear to have learned proper doggy manners.  The good thing is if one of the dogs checks him, he wil not react.  He's doing well with his basic cues/commands.  Still pulls when on leash, but his Handler tells him "easy" and he relaxes. and doesn't pull as much.

Week 4.  Gus is a happy, loving dog who CRAVES attention from people.  He will engage with other dogs for playtime.  He's such a sweetheart and a bit of a goofball.  He has done well with all his cues/commands.  Still working on his leash walking and also has begun to learn "find it".  He would do well in a home with a lot of space for him to run around as he is quite energetic.  Would recommand a home with kids over 12-13 just because he is so strong and might accidently knock over smaller children.  He still needs some work but we expect he will be ready for adoption soon.