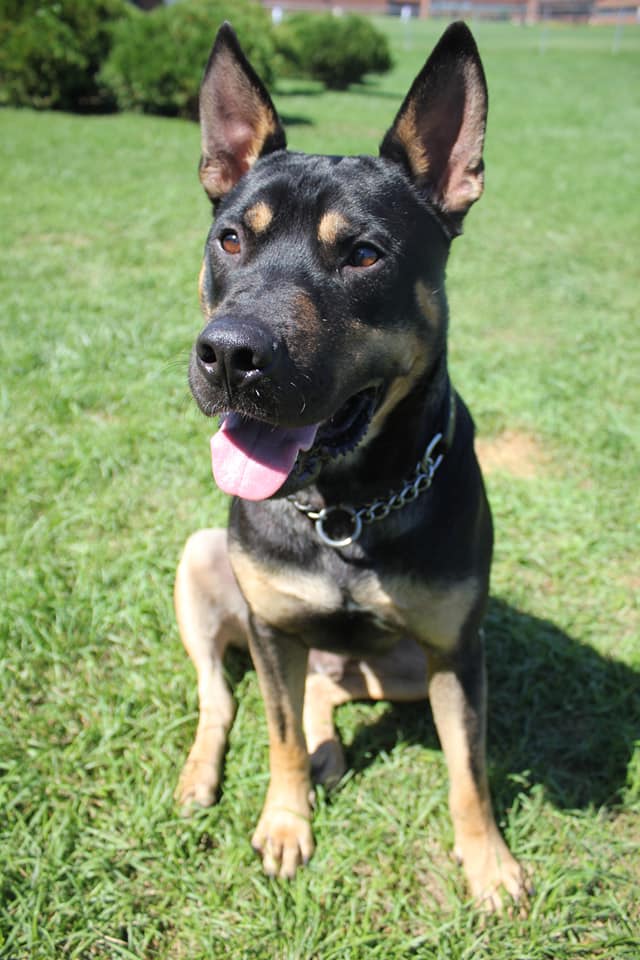 Hunter is a 2 1/2 yr old male GSD mix. He arrived 8/6/21. He came into the program to learn how to be a dog (basic manners, unwanted jumping, focus, high energy).  If you are interested in adopting Hunter after he completes his training, please contact his Rescue, Tara's House Animal Rescue at mvm11@comcast.net or waldiesmom@gmail.com

Week 1.  Hunter's handler has used his first week to assess his overall behavior.  He is very friendly toward both people and the other dogs.  He is very mild-mannered and polite.  Right now his handler has not seen any major behavioral issues (resource guarding, etc.)  which could hinder his adoption.  His basic manners are relatively good but his response time needs improvement.  At this point, he does not know any basic commands (sit, stay, etc.)

Week 2. Hunter's training has been centered on improving his response to the basic obedience commands while distracted.  The handler used other dogs for the distraction.  He had very poor results (by his handler's standards) with the dog distraction but was much better when using people as the distraction.  This was all based on his recall response time.  His handler believes this is where he will be focusing his training.  Hunter is a super sweet dog and has to say hello to everyone he meets.  He has shown great improvement on his basic obedience commands.  He has not displayed any aggression or reactivity towards people or other dogs, nor has he showed any guarding or fear/anxiety issues and is very welcoming to both humans and the other dogs.  He's a prison favorite.

Week 3.  Hunter's response time while distracted has improved.  This week's training was focused on recalling him while he was playing with another dog.  He did very well.  His response time continually improved as the training sessions progressed.  He was even very successful when off  leash.  His response time to the other basic cues and commands still needs improvement, except for wait and stay, which he is very good.  His handler has begun teaching him down and paw.  Hunter still has not displayed and aggression or reactivity towards peopple or other dogs, or any form of resource guarding.  His "good" manners are also improving but still need work.  His handler did note that he seems to be afraid of his water bowl.  Don't know what that's about but it will be addressed.

Week 4.  Hunter is doing extremely well in all the areas his Handler has been working with him.  His handler's assessment this week.  Using a scale of 0-5, Hunter was assessed by his Handler as follows:  Basic Obedience 4.5, Behavior 4.5, House Training 4.5,  His next stage of training will be to focus on teaching Hunter to respond to his cues/commands with other people (not just his Handler).  He also needs a bit more work on his focus.  Hunter is truly a loving dog, and makes a point of going up to everyone to say "hi" and maybe get a free belly rub.  He has shown absolutely no reactivity or guarding issues.  His Handler believes a perfect family for Hunter would be with another high energy dog or a VERY ACTIVE family life.  Hunter is just a very good natured dog that welcomes all humans and dogs with a gentle approach.

Week 5.  Hunter is one of the very best dogs in the program.  He loves any and all people, as well as the dogs (we won't let him interact with the dogs who are currently dog reactive).  Hunter's recall while distracted by other dogs is improving.  The key seems to be the timing of the cue.  The cue has to be given at the moment of least distraction (lowest level of play).  The goal this week is to strengthen this cue, improving its reliability.  Hunter's response to the basic cues/commands is continuing to improve.  The challenge is getting him to associate the response time with other people (he has a 3 second or less response time with his Handler).  This appears to be the human's fault, and not Hunter's.  They (the other people) are proving to be difficult to train when teaching them the proper way to give and to reward a positive response by Hunter to the cue.  We all know people are so much more difficult to train :-)  Otherwise, Hunter's traing is going perfectly.  His Handler will begin traing him for the Good Canine Citizen Test and challenge him off leash in a crowded environment.  Hunter has never displayed any reactivity issues towards people or dogs.  He has not displayed anyt form of resource guarding, separation anxiety or any other major behavior issues..  His good manners training is complete and he performs the cues/commands reliably.  Still needs a little more work to improve the length of time when given the focus cue.  Hunter could go to any person/family.

Week 6.  Getting Hunter to associate the cues with others is proving to be more difficult than his Handler thought it would be.  It is seeming to be more of the humans fault that Hunter's.  The humans are not following the Handlers instructions.  Because of this, his Handler will have to be creative in his association training.  His recall while distracted still needs improvement.  His Handler will continue to practice.  His main distraction is when other dogs are out.  He absolutely loves to play.  I will say he is excellent in everything his Handler asks of him.  He told him to sit and stay while he went inside the housing unit.  The Handler came back out in about 5 minutes and Hunter was still sitting, waiting for him.  Hunter is truly a sweet and loveable dog.  Some people may look at his picture and see a shepherd or shepherd mix and shy away.  Don't let his looks fool you.  He loves everyone, whether he know them or not.  Hunter DOES NOT have any reactivity issues at all, nor does he have any guarding issues or anxiety problems.  His impulse control is improving daily.  All of his good manners training is excellent with his Handler.  His sit and down become poor when non-primary handlers request him to do.  His leash walking is PERFECT with whomever he is walking with.  Hunter is a sweet and loving (and active) dog who is extremely smart.

Week 7.  Hunter's association training is beginning to work.  This training was focused on him associating the skills that his Handler has taught him with other people.   His response time when give a cue is improving.  He still pulls to his Handler when he is around and will ignore the other person at times, but his Handler still believes it's a lack of confidence of the person.  When his Handler is around, Hunter performs better.  He will continue to work on this and continue to reinforce what he has learned.  Hunter has no reactivity issues, resource guarding issues or anxiety issues.  His good manners training is almost complete.  On leash he is perfect.  Off leash, he is about 75% reliable with his recall.  His Handler made a note that if someone is looking to adopt 2 dogs, Hunter and Gus would be a great fit to be adopted together (they are from different Rescues but that could be possible if both Rescues agree).  All Hunter truly needs is a loving home with a companion/family who have love to give.

Week 8.  Hunter's association training is gradually improving.  The breakthough moment was getting the humans to understand what to expect and teaching them from the first step.  He will still try to initiate play before responding to the given cue, which is exactly what he did when his handler first got him.  If the human ignores the play action/attempt, he does perform the cue. His Handler will continue this training, along with the good manners, to ensure Hunter will respond to anyone.  He can still use some work on his recall.

Week 9.  Hunter is getting very close to being ready for his furever home.  His association training is going very well.  He responds to other people when lured with treats.  He will respond to people without treats if that person works with him consistently.  It all comes down to the person giving the command.  His Handler is continuing to have more people work with Hunter.  Hunter has no issues with people, dogs and has never exhibited any resource guarding.  He is excellent with his good manners and cues/commands.  When adopted, his new family will have to commit to continuing his training (as is true for anyone who adopts any dog).  Hunter is a truly remarkable and smart dog.