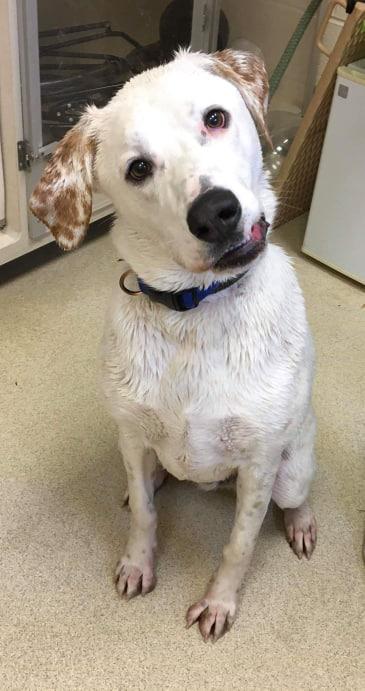 Freckles (formerly Snowball) is a 1 yr old male Lab/Hound mix.  He arrived in the program on 1-8-20.  If you would be interested in adopting Freckles when he has completed his training, please contact Linda Domer at ldomer84@yahoo.com or 301-800-6102.

Week 1.  Freckles is a dog that loves to play and have fun.  He is a big puppy who doesn't realize just how big he is.  He plays like a puppy.  He can, at times, overwhelm people with his play because he tends to go overboard with his exurberence and excitement.  He is also a very vocal dog (which some people misread as aggression) and doesn't really understand his own strength.  Basically, he is having to learn basic obedience and manners which are usually taught to puppies.  He also has a stubborn streak, and does in fact throw "temper tantrums" when he doesn't get his way.  Freckles is very smart but has a very short attention span, just like any puppy.  He is slightly treat oriented, but not enough to get his attention.  Basically, Freckles in in need of learning everything you would teach a puppy.  It just so happens this puppy weighs 60+ lbs.  Once Freckles learns his basic manners and cues/commands, he is going to make a wonderful companion.

Week 2. Freckles is a happy and fun-loving dog.  He just wants to jump and love on everybody, which are the primary behaviors his Handler is working with.  He is a very large puppy, with puppy behavior, and needs to learn his basic manners.  Freckles is a very active young pup who loves the outdoors.  He loves people and other dogs, but his energy level and size tends to frighten some of the smaller dogs.  He's basically still learning not to be the "bull in the china shop" :-)

Week 3.  Freckles is still learning what behaviors are good and bad.  He is such a happy-go-lucky dog who was never trained in any way, and is now a big, happy 1 year old with no manners.  He is a work in progress, but fortunately he is such a happy and friendly dog. We have no doubts that we can "curb his enthusiam" and teach him proper manners and behavior!!

Week 4.  Freckles is a high energy dog who loves to play and have fun.  Unfortunately, his high energy can be overwhelming at times.  He doesn't have the best manners, so he has to learn how to contain his emotions, which is a definite work in progress.  It has become very clear that Freckles was allowed to behave however he wanted which makes training him challenging at times.  He is extremely friendly but he is also at times, very wild and has the tendency to not want to listen.  He has shown some progress since arriving but he has a long way to go.  Because he doesn't realize his own strength, it is a must that we get his behavior under control before he is ready for his furever home.  Freckles is a really good dog and just needs time and consistency to get through his "flaws".  We have no doubt he will make a wonderful companion.  He is responding to his cues/commands sit and down.

Week 5.  Freckles is starting to respond to his Handler's training.  He is more responsive to his cues/commands.  He still wants to revert to being a "puppy" (in spite of his size) but is showing progress.

Week 6.  Freckles is getting better with his "puppy" behavior.  He has been getting extensive work with his good manners.  He is extremely playful and friendly but has a hard time understanding when enough is enough.  Freckles in no way means any harm to anyone.  All he wants to do is play, but his overzealous and extremely excited behavior (along with his size) can sometimes be misunderstood for aggression.  Freckles is also very vocal, especially with people he likes, which is something his Handler is working to improve.  Because he is such a big puppy, he needs to be constantly and consistently taught to remain calm.  He is a loving and sweet dog who needs to learn his manners.  He loves to go outside and he absolutely loves to play.  Freckles does very well with people.  He also gets along with other dogs as long as they don't show aggression.  He does have a tendency to chew socks and can get a little protective, but overall h e has no guarding issues.